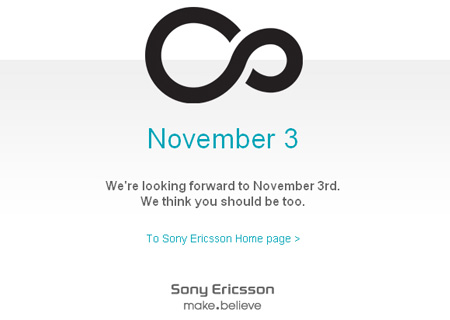 Well, Sony Ericsson’s most rumored handset dubbed Rachael is back in news. This handset has been out of rumors ever since its specifications were leaked in July. But now Engadget reports that the Rachael, also known as the Xperia X3, may be released on November 3.

Reportedly, Sony Ericsson has put up a teaser on its What’s next web page. The page talks about an upcoming device that will be unveiled on November 3. The page quotes ‘Sometimes there’s a thin line between the extraordinary and the magical. Did we cross it?’ Well, the quote surely has captured the attention of many.

The HTML source code of this page features multiple references of the word Rachael. Considering this hint, it is speculated that the upcoming device that this page talks about is the Android-based Sony Ericsson Rachael (Xperia X3).

The Rachael is believed to sport a 4-inch 800 x 400 pixel touchscreen display and an 8 MP camera with LED flash. It also offers support for Quad-band GSM and Dual-band 3G with HSDPA and HSUPA.

However, there is no official word on the release of the handset.