In a press statement, the makers of the popular Opera Mini web browser have announced that the application has crossed 50 million users in India. And to celebrate the achievement, the company’s CEO Lars Boilesen performed with a Bollywood flash mob at a mall in New Delhi.

With its user-base now crossing 50 million, the Opera Mini web browser has taken its place as the third most popular application in the country with the top positions being occupied by Facebook and WhatsApp. The app has been around for a long time, even during the days when Nokia’s Symbian was king. 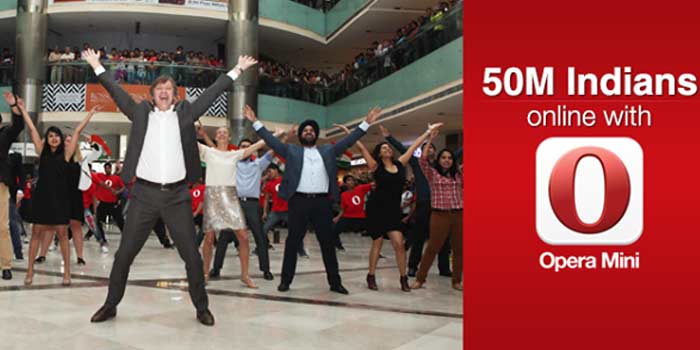 And it has grown a lot as well, in popularity and functionality. According to the company, the number of users for the app in India grew to a staggering 110% just over the previous year and now accounts for 50% of the total user-base. What makes the Mini web browser such a great product is that it isn’t resource hungry and will work on the slowest of smartphones with even 256MB RAM.

The company’s data compression technology which reduces the size of web pages by up to 90% is the key selling point as it improves browsing speeds and also helps cut down on data costs to a great extent. And since a lot of people in India are still on 2G networks, this has proven to be very viable.

Its success in India can also be attributed to extended support for local languages which comprise of 13 native scripts including Hindi and Tamil. Also, the application is compatible with Java-based feature phones and low-cost smartphones.

Over 350 Android devices come with Opera Mini preloaded and the company has partnered with multiple OEMs in India to offer the application.