Some Candy Crush Saga loyalists on Facebook may already have noticed the all new Dreamworld that has recently been added to the web version of the game. As many as 65 new levels are now part of the social game that already boasted of quite a many of those.

The deliciously sweet game is currently one of the most popular social titles and has millions of players as of now. The Dreamworld has a new character called Odus, the owl which should appear on the top left side on the map. As soon as you tap on it or click when playing on Facebook, you are transported to the new area that is full of new levels. 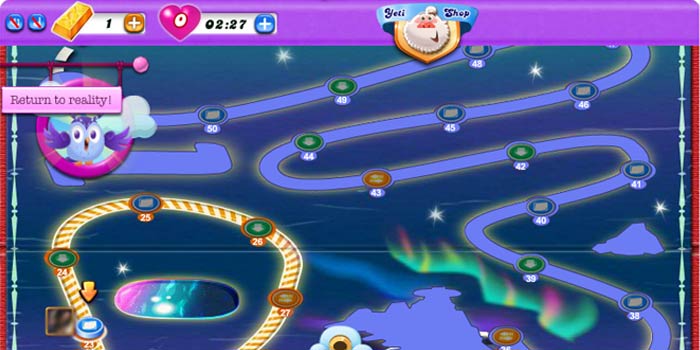 But that’s not all. You will be glad to know that the blue-colored owl actually possesses some superpowers and helps you during the game a couple of times. The owl sleeps on a half moon which is placed on the left side on the screen. Every time you match candies, the moon fills up and when it is completely filled, the owl uses its ‘moonstruck’ powers to give you headway in the right direction with extra points.

But don’t think the developers have made it so simple. The usual obstacles continue to be present and along with tackling them, you will have to make sure you do not disturb Odus. The two candies which appear on either sides of the half moon should be balanced out. So while you are matching those candies, be careful to maintain the balance.

As Mashable reports, the updated version of Candy Crush Saga is available on Facebook as well as for mobile platforms like Android and iOS.