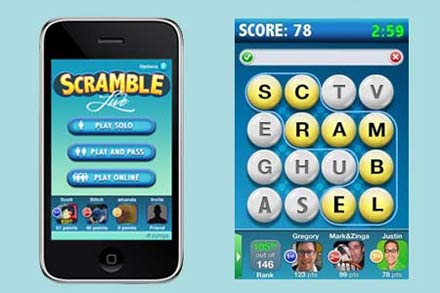 Zynga announced the availability of the Scramble Live game for the iPhone. It is a fast fun game that will test your vocabulary while you enjoy unscrambling the jumbled words. It is the first game on the iPhone that allows players to compete live with other players on Facebook in real time.

The exciting Scramble Live game challenges a player to find words in a grid. You will be given a set of scrambled letters; all you need to do is re-arrange those words to form a meaningful word. At the end of each round, players will be shown how each missing words are formed on the board.

The popular Scramble Live game on the iPhone will allow players to play the game with other players on Facebook. The game involves three modes namely the Solo, Live, Play and pass.

The solo mode will allow users to play in ladder mode and beat their friend’s score. With the Live mode, the players can enjoy playing games with other users in real time. The Play and Pass mode lets you play with upto three other players sitting next to you on the same device.

“Games are more fun when they are played with real friends, which is why we wanted to give iPhone and iPod Touch users the opportunity to play a classic word game with people they know,” added Mark Pincus, CEO, Zynga. “We pioneered the social experience on the iPhone with the launch of ‘Live Poker,’ and we are going to continue to deliver on that promise and leverage the outstanding attributes of the iPhone.”

Taking complete advantage of multi-touch technology through game play, players can use the iPhone’s accelerometer and multi-touch feature to rotate the board.

Scramble Live is available for $4.99, you can also enjoy playing the game for $2.99 for a limited time.