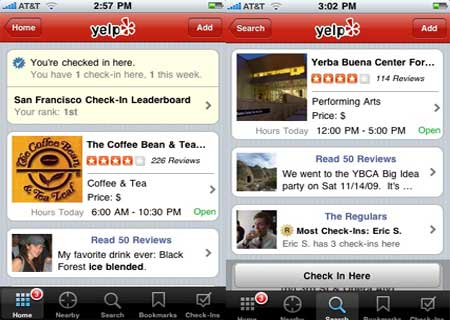 This bit of news may enthrall all readers sitting out there on a couch with a hot cup of coffee. According to the official Yelp Blog, with the latest version of its iPhone app (version 4), Yelp has recently revealed a bunch of brand-new entrancing features. Sure enough, the new ability to check-in to venues nabs the greatest attention of all.

Bringing the world of Yelp to one’s iPhone, the latest offering lets users see and interact with their Yelp profile as they would on Yelp.com. Nice, isn’t it? Well, users can now see and invite friends from the phone’s address book to join them on Yelp.

Yelp has also added the ability for yelpers to ‘Check-in’ to businesses. Users can now broadcast there whereabouts and send Quick Tips to their friends on Yelp, Facebook and Twitter who, if they opt-in to these updates, will be able to see the location both via ‘Push’ alerts, as well as on a map. On the other hand, active users of this particular feature may receive ‘Regular’ status of highly-frequented businesses.

Pretty interestingly, Yelp has taken another online feature, offline. Users can now share their check-ins and Quick Tips via Facebook Connect and Twitter while on the go. Besides, yelpers can see updates to Monocle as well, thanks to Yelp’s Augmented Reality feature.

So experience all these new features from Yelp and manage everything even more efficiently.