Apart from the Mi 4 flagship phone, Xiaomi also revealed that it’s bringing the new MIUI 6 interface update to its devices in India and the roll-out of the fresh software has already commence. The highly popular Mi 3 handset is the first to get the new visuals enhancements and the Redmi series will follow suit soon.

The MIUI 6 update is already seeding to the Xiaomi Mi 3 and it runs on top of Android KitKat. Same will be the case for the Redmi Note 4G which is already on version 4.4 of the OS. The software will arrive for the phablet as soon as next week, but owners of the dual SIM HSPA model will have to wait until late March for the firmware to arrive. 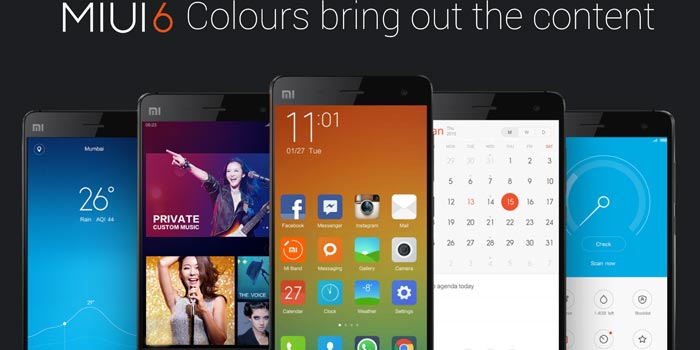 The Redmi 1S isn’t going to be seeing the update arrive until the end of next month either. MIUI 6 brings various improvements over version 5, mainly by introducing more colors and simple, yet beautiful icons. Xiaomi has put a lot of focus on the little things in its custom UI by improving animations, especially when moving between screens, deleting apps and unlocking the device.

The way notifications are displayed have also been augmented as only important alerts will show up, while the others will be kept hidden so that they’re not a disturbance and can be viewed later. There are also floating notifications which work in a similar fashion to how Lollipop displays alerts. These are just some of the many new features you’ll find on MIUI V6, albeit not all of them will be milking their debut in India.

Xiaomi notes that update is being seeded over the air and you’ll also be able to manually download it through its official forum for the Mi 3, Redmi Note and Redmi 1S smartphones.