This is the fastest rate at which the Xiaomi Redmi 1S units have managed to sell out seeing as the two previous sales of the device had managed to last a wee bit beyond the 4-second mark. 40000 phones were snapped up via Flipkart by eager buyers in just 3.4 seconds on September 16, leaving the unfortunate ones frustrated as usual.

The Redmi 1S handset will now again go on sale next Tuesday, that’ September 23. Those who wish to buy it then, will need to get themselves registered for the sale. At the moment, it’s not clear as to how many units of the device will be made available next week. 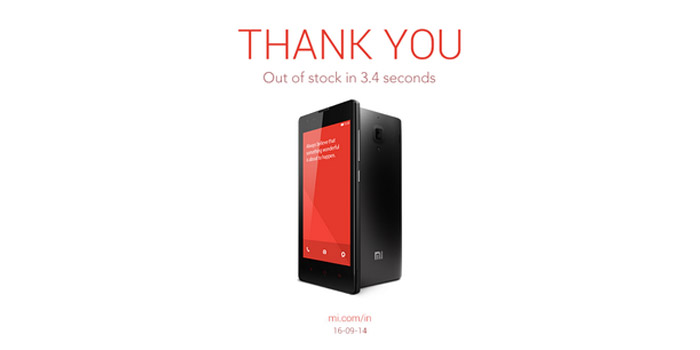 The Xiaomi Redmi 1S with its advanced range of components and an extremely alluring price tag is challenging the likes of big guns such as the Moto G, the Asus ZenFone 5 and others. At Rs 5999 buyers of this smartphone get an HD display, a quad core Snapdragon processor and 1GB of RAM.

One of its downsides – if you consider it one – is that its software is a custom ROM built by Xiaomi, called MIUI. It is based on the Android Jelly Bean platform, and features a pretty unorthodox user interface.

Here’s a deep look at the specs of the Xiaomi Redmi 1S smartphone:

If you wish to buy the Xiaomi Redmi 1S on September 23, you’ll need to register for it by following this Flipkart link.