The second time the Xiaomi Mi3 went up for sale through Flipkart, disappointed fans were turned away when the entire stock of units vanished in 5 seconds of it being up for grabs. Those hoping to pick up the smartphone today may have been wishing that history wouldn’t repeat itself.

UPDATE: If you’ll believe it, Xiaomi says all 15000 units of the Mi3 got sold within a blazing 2 seconds of being made available for purchase on Flipkart. We really don’t know how that works out considering it takes us more than 2 seconds to sneeze though. 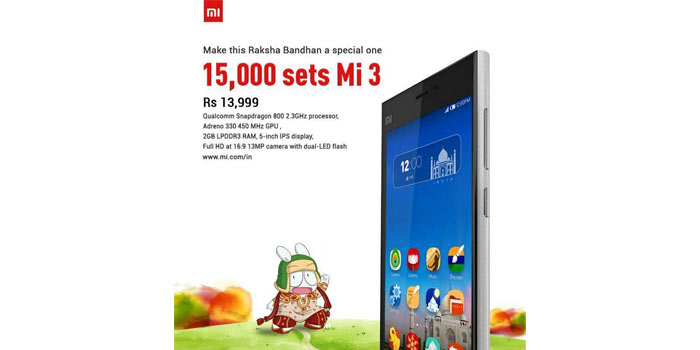 Registrations for the Xiaomi Mi3 handset were closed at midnight on August 4 and the phone was made available for ordering on August 5 at 2pm. The first round of the Mi3 sale resulted in the device going out of stock within 30 minutes of its release. But this was nothing compared to what happened the second time. We’ve already mentioned Flipkart’s and Xiaomi’s claims about all units having vanished just 5 seconds after they showed up.

The Mi3 handset is in high demand due to its low asking price of Rs 13999 combined with its power-packed specifications list. Equipped with a 1080p display, it runs on a quad core Snapdragon 800 processor. A 13MP main camera also forms part of its offerings apart from other impressive components, the full list of which we’ve written down below.

Those still wishing to buy the Xiaomi Mi3 can register themselves on Flipkart until midnight of August 11.