Following its price cuts in China, the Xiaomi Mi 4 smartphone in India is also getting revised retail tags. And this has been carried out just a few days ahead of the company’s big premier phone launch in the country where a new and cheaper variant of the said handset will be announced.

According to the official Mi India Twitter account, the 16GB Xiaomi Mi 4 smartphone will now sell for Rs 17999, while the 64GB model is up for grabs at Rs 19999. The previous rates were Rs 21999 and Rs 23999, respectively. Not only is the phone cheaper, it’s also more affordable than the OnePlus One which comes in the same memory configurations. 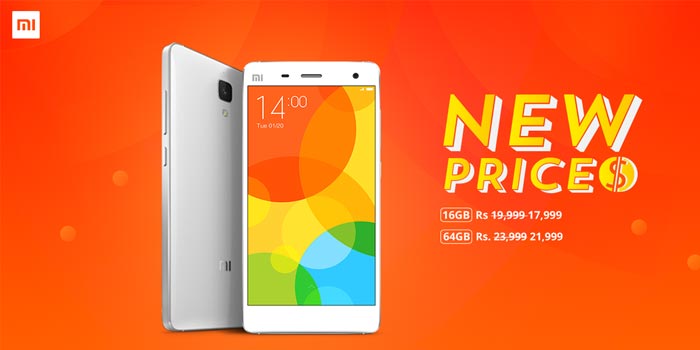 This is certainly a move that will favor Xiaomi, but the other Chinese OEM does have the upper-hand in a few aspects since its device runs on Lollipop based on the highly customizable Cyanogen OS 12 and has a much larger display. The Mi 4, on the other hand, still packs Android KitKat and offers a more compact design.

Here’s a quick recap of the Xiaomi Mi 4’s specs:

Both Xiaomi phones, however, are more or less similar where hardware is concerned. As mentioned above, a new variant of the Mi 4 will go official next week and it comes with toned-down hardware. The reductions for the original models could be in preparation for the upcoming launch.

You can purchase the Xiaomi Mi 4 with the new retail tags across all outlets and online stores where the smartphone is available.