Owners of the Xiaomi Mi 3, Mi 4 and Mi Note will be getting a taste of Android 6.0 Marshmallow soon. They won’t have to wait too long for the new OS, as the company is apparently in the final stages of testing it out.

This information comes directly from the company’s Operations Manager. He took to Weibo to announce the news and also posted a screenshot of the update for the Xiaomi Mi 3, Mi 4 and Mi Note. As per the image, the next MIUI 7 rollout will be based on the Android 6.0 Marshmallow OS. Furthermore, the upcoming MIUI 5.12.24 update weighs 518MB. 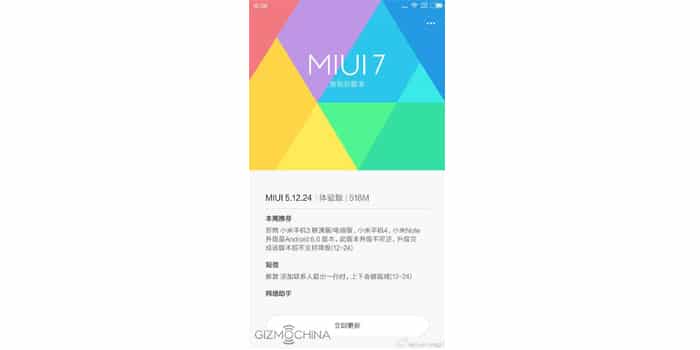 To recollect, the same source had previously revealed the Mi Note and Mi 4 would be the first to receive Android Marshmallow. At the time, he said the upgrades would be released in the form of closed beta versions. Gizmochina is of the opinion that a developer version will be rolled out later. The final version of the upgrade may be handed over via OTA a few months post this.

All 3 of the handsets that are set to get Android 6.0 Marshmallow initially ran Android 4.4 KitKat. The devices later received the MIUI 7 update in October this year, which was based on Android 5.1 Lollipop and came with a number of significant improvements. The China-based brand has not yet revealed what it’s bringing to the table in its next software rollout.

We’ll keep you posted when the Xiaomi Mi 3, Mi 4 and Mi Note start getting Android 6.0 Marshmallow. Like we said above, this will likely be a beta launch, so users may have to wait for a while longer if they want to get their hands on a stable version of the OS.