News is that Xiaomi will be following up its 7.9-inch display-equipped Mi Pad with another tablet that will house a 9.2-inch panel onboard, apart from mid-range specs. This slate is expected to be an affordable one, and can very well make its debut in China in the months to come, after which it should probably land in India as well.

Information about this new Xiaomi tablet comes via the GFXBench website (via GSM Arena) which was recently paid a visit by it. The result mentions that its 9.2-inch display will have a 720p HD resolution, which is quite weird for a tablet since such products usually opt for squarish aspect ratios. 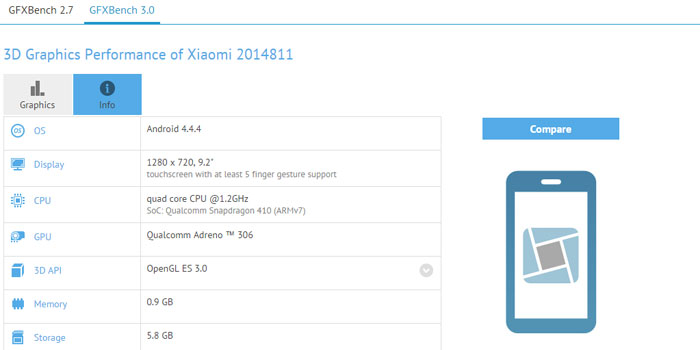 Anyway, another important highlight of this slab will be its incorporation of the Qualcomm Snapdragon 410 chipset which houses a 64-bit 1.2GHz quad core CPU. In order to take advantage of 64-bit processing, Xiaomi will need to infuse it with the Android 5.0 Lollipop OS after launch, which hints at the possibility of a Lollipop-based MIUI version being on its way as well.

Also Read: Xiaomi is now the third biggest smartphone vendor in the world

The tablet in question plays home to an Adreno 306 GPU which is accompanied by 1GB worth of RAM. Since its available storage has been mentioned to be 5.8GB, it’s safe to assume that an 8GB ROM will form part of it, aside from a microSD card slot of course.

Here’s a good look at the leaked specs of the Xiaomi tablet:

Interestingly enough a SIM card slot has been mentioned to be one of its attributes as well, which points towards cellular support. Other details on this supposed 9.2-inch Xiaomi tablet are unknown at the moment.