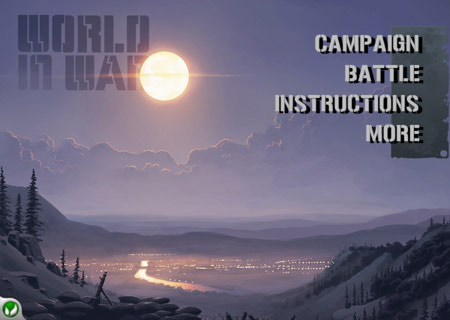 The world witnessed several major battles and strategic campaigns whilst those six blood-drenched years of the World War 2. Offering iPhone owners a chance to revisit those battles and wars, Pan Vision and Fabrication Games introduce World in War, a turn-based military strategy title to the App Store.

Gamers can command either the Allied powers or German forces while taking part in some of the well known battles of World War 2. They will have to fight tooth and claw in order to win major historic campaigns like Stalingrad, El Alamein, Operation Torch, Barbarossa, and Overlord. It allows them to challenge friends using Openfeint in either the two player Hotseat mode or an extended play by mail one.

“I have played many fantastic strategy games with my friends. But most require a huge investment of time to play in one sitting. We wanted to replace those time‐killers with a quick to learn accessible experience for the iOS handheld platforms. World in War is a reaction to that urge,” stated designer Tommy Palm of Fabrication Games.

iPhone owners can concurrently take turns on the same device and plan out their next moves at the same time as their adversaries. The game is loaded with quick play battles and 3 full length campaigns throughout Europe, Russia and Africa. On capturing territories, players can amass resources to build tank, artillery and infantry units for battle or buy special military strategies.