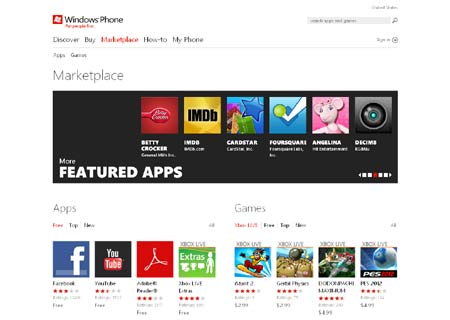 Windows Phone Marketplace extending to 13 new countries could come as a welcome piece of news to fans worldwide. With this expansion, users of phones run on the mobile OS get access to a number of apps and games right from localized virtual storefronts.

The nations to take advantage of this facility are inclusive of the Venezuela, Turkey, Slovakia, Estonia, Bulgaria, Slovenia, Ukraine, Latvia, Croatia, Lithuania, Romania, Iceland and Costa Rica. Counting the nations where the software was launched during the start of the year, the total number of localized portals of the Marketplace amounts to 54.

“If you live in one of the countries I mentioned above, here’s how to set up your phone to download apps from your new local Marketplace. (Note that for technical reasons it might take a few days before Marketplace is visible on everyone’s phones in the new countries—and look for the web versions of the new stores sometime next week,” states the team on the official Windows Phone blog.

Early this year, the Marketplace kicked off in regions like China, Indonesia, Peru, Philippines, Argentina and Malaysia. But the list doesn’t end here, with stores also set to open in places like Vietnam, Saudi Arabia, Iraq, Bahrain, UAE, Qatar, Israel, Kazakhstan and Thailand. This announcement was made at the Mobile World Congress 2012, as mentioned on the official Windows Phone blog.

Notably, the China Windows Phone Marketplace has almost 20,000 apps and 15,000 registered developers to its credit already.