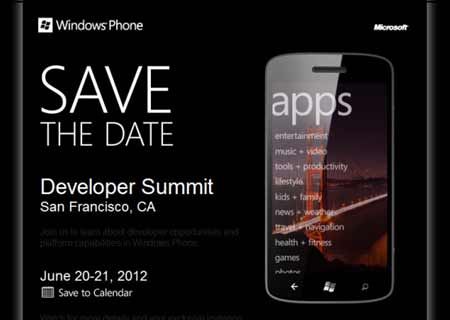 Microsoft has conveniently etched a place in the limelight and this time it’s for the Windows Phone Developer Summit that is currently live. This event holds significance as we could possibly get a sneak preview of Windows Phone 8.

It’s not just a developer event, considering we’re talking about the unveiling of the next generation Microsoft mobile OS. It has been codenamed Apollo and may bring an array of new features that were not seen in Windows Phone 7. The newest smartphone OS may support removable microSD card capacity, decent screen resolutions, NFC capability and multi core chipsets.

On the software front, we may see a new Zune PC client software with an upgrade element similar to ActiveSync, reports CNET. Adding considerable weight to the software specs is the inclusion of the Skype app, if it is indeed to be seen in the upgrade. However, Microsoft is yet to divulge any of the hardware features tagging along the new mobile OS.

It seems Microsoft has decided to remain anything but complacent on the increasing popularity of Google and Apple ventures. With so many handsets operating on the Windows 7 platform, it would be interesting to see whether Windows Phone 8 handsets are successful in turning the tables on other leading smartphones.

Just as a reminder, the Microsoft Surface tablet was unleashed just yesterday and that should bring Windows 8 within view. We can only guess that the new mobile OS may be along the lines of Windows 8.

The Windows Phone Developer Summit is presently going on in San Francisco.