Home Tablet White Amazon Kindle out in India for Rs 5999

A white version of the Amazon Kindle has been launched in India and is now available via the e-commerce site and offline outlets across the country. The device’s black variant was released in September 2014 and both are priced at Rs 5999.

The Amazon Kindle is the only e-reader by the company getting a white version, with the Voyager and Paperwhite continuing to be sold only in black. Other than the change in color, the rest of the specs of the gadget remain unchanged. It sports a 6-inch glare-free touchscreen without its own built-in light. The display further possesses a resolution of 167ppi. 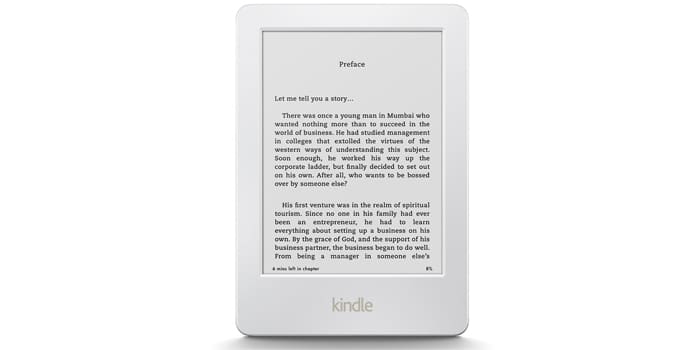 The Kindle packs 4GB of internal space, in addition to free cloud storage for all Amazon content. The brand claims the battery lasts for 4 weeks on a single charge. The time has been calculated based on 30 minutes of reading every day with wireless connectivity switched off. It powers up via a microUSB 2.0 cable, with an Indian adapter sold separately.

Amazon has blessed the device with various features such as an integrated dictionary and an X-Ray tool to quickly get access to passages which mention important places, characters and topics of interest. Whispersync keeps a track of the last page read, annotations and bookmarks across all the devices the Kindle app is installed in.

An enhanced search function pulls up results from Goodreads, the Kindle library and Amazon Store. The brand has promised a new Family Library service where books can be shared between accounts for free. The retailer’s Kindle Unlimited service lets people read as many books as they want for either Rs 199 per month, Rs 999 for 6 months or Rs 1799 for a year.

You can purchase the white Amazon Kindle for Rs 5999 here.