WhatsApp’s finally started rolling out the long-awaited ‘Delete for Everyone’ feature that allows users to revoke the message they just sent. WABetaInfo reports that the update is rolling out very slowly across the world, as evidenced by numerous Twitter users saying they’ve gotten the ability.

A recall feature has been in the works at WhatsApp for at least a year at this point, but the skill was hidden away. Everyday users who make a mistake can now take it back by simply opting for Delete for Everyone. The offending missive will instantly be removed from their own and the other person/group’s chat. 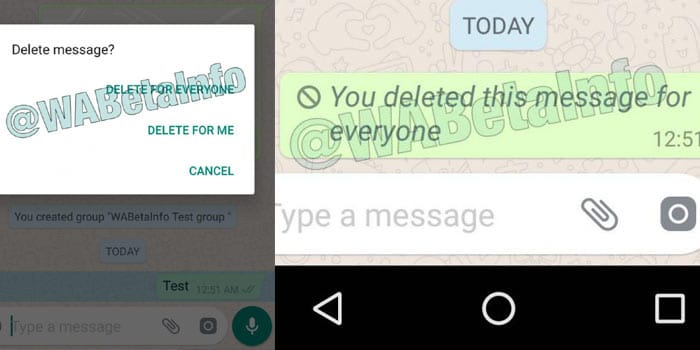 There’s also a new ‘Delete for Me’ option alongside that’s just meant to eliminate the missive on the sender’s device only. All kinds of messages can be deleted including texts, GIFs, photos, videos, contact cards, files, locations, status replies, and voice messages.

It should be noted that individuals on both sides of the conversation will have to be on the latest version of WhatsApp for the revoke tool to work. It’s supported by Android, iOS, and Windows Phone, but not Symbian. You can try obtaining it faster by reinstalling the app on your handset, but there’s no guarantee this will work.