WhatsApp has sparked a bit of panic across India today as many users who tried to open the app were greeted with a message informing them that their version of the application had become obsolete on 13 January. The missive requested them to head to the Google Play Store to download the latest version.

This sounds simple enough, but it seems almost everyone who tapped on the download button were redirected to the Play Store and told that there were no new updates available to download. Naturally, this lead many people to take to social media outlets like Twitter to voice their frustration over the matter.

Unusually, a message at the bottom of the warning asks the individuals affected to leave the testing program if they no longer wish to receive the WhatsApp testing version. Techhook reports that a majority of users aren’t on the beta program in the first place. 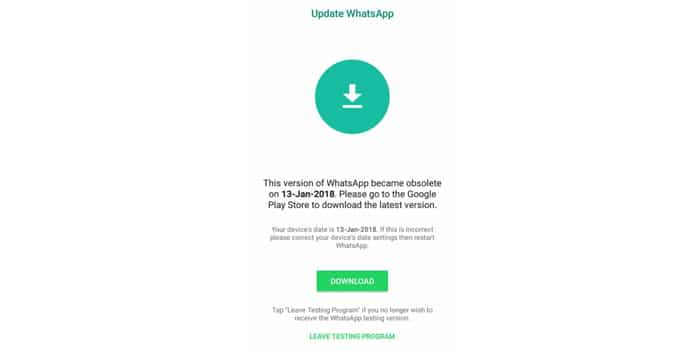 The publication also notes that most of the people who can’t access WhatsApp right now are using Xiaomi phones. This isn’t a universal phenomenon though, as many of the brand’s customers aren’t reporting the issue.

WhatsApp has released a statement on the concern, reassuring customers that it’s being fixed. There was apparently a problem with the way the app was distributed, something which it notes is not under its control.

Also Read: You can still read WhatsApp messages after they’ve been deleted

Till a permanent fix can be found, there is away for affected users to regain access to WhatsApp without having to delete the app. People can go to WhatsApp’s website and download the APK. Installing it will update the existing app so it won’t be obsolete.

Note that they’ll have to allow installation of apps from unknown sources before undertaking this step by navigating to Settings > Additional Settings > Privacy > Unknown sources and toggling the option. Once it’s done, they can retrace their steps and switch it off again.