WhatsApp’s been testing its new payments platform for months upon months now, and it looks like the company is finally willing to let the public in on what it’s been working on. Beta testers on Android and iOS versions of the app have begun noticing the appearance of the feature on their phones.

This is a big step towards an official release and provides a glimpse at what to expect when it does. The tool appears to be live on WhatsApp for Android beta version 2.18.41 and WhatsApp for iOS beta version 2.18.21 onwards. The enterprise relies on the government’s UPI platform to power its peer-to-peer payment system.

Based on the screenshots above, a number of banks such as ICICI Bank, SBI, HDFC Bank, Axis Bank, Yes Bank, and Airtel Payments Bank support WhatsApp Payments. Interestingly enough, WABetaInfo has noted that most of the people who got access to the feature were on Airtel’s network. 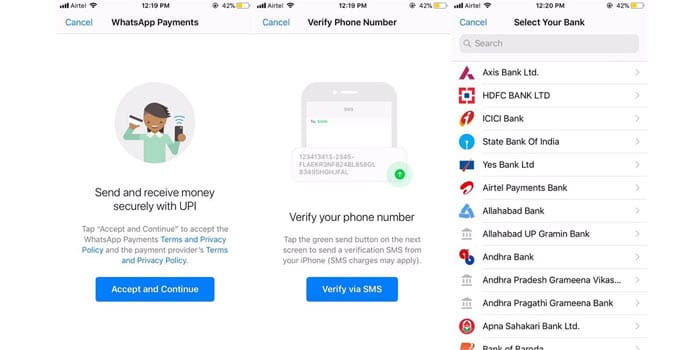 This could be a coincidence, or it might be deliberate. Once WhatsApp Payments arrives, users can find it in the Settings menu and within the attachments button in a chat window. Before they can get started with sending money to their contacts, they’ll have to make a UPI account if they don’t have one already and select their bank of choice.

Individuals will also have to verify their mobile number via an SMS. Both parties involved in a transaction will have to support WhatsApp Payments. It could prove pretty useful in the long run, with convenience being its biggest asset. This will also help it against the fierce competition posed by rivals like Paytm and MobiKwik.

You can download the WhatsApp for Android beta via APKMirror.