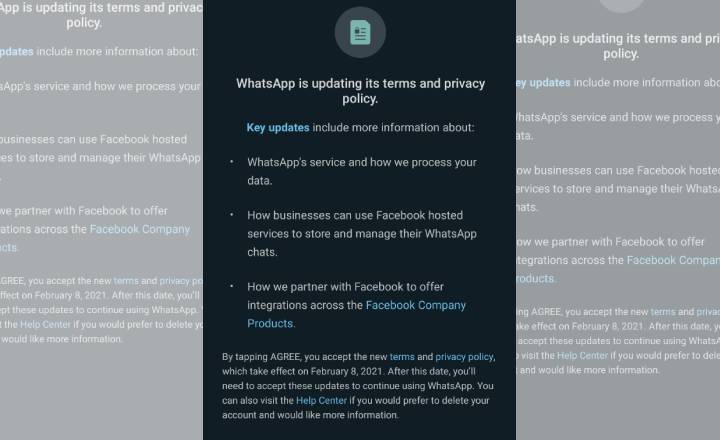 As the controversial new privacy policy from WhatsApp keeps nagging users who don’t accept it, the makers of the popular app have reversed course on an previous diktat. Earlier this month, the Facebook-owned company had said that it would start limiting functionality to those who don’t accept its new privacy policy by May 15. However, Facebook has now said that this won’t be the case anymore.

In a statement issued to The Verge, a WhatsApp spokesperson said, “Given recent discussions with various authorities and privacy experts, we want to make clear that we will not limit the functionality of how WhatsApp works for those who have not yet accepted the update.” This is good news for those who wish to refrain from accepting the policy, however, it does mean that they would have to deal with frequent prompts on the app asking them to have a look at how harmless the policy is.

The new changes to the WhatsApp privacy policy were announced back in January and were met with considerable uproar as they asked for permission to share user data with Facebook and its “family of companies” starting February 2021. This option was previously opt-in in nature. The policy is still not applicable in the EU due to the strong GDPR rules there.

While the last date to accept the policy was set for February 15 initially, the date was extended up to May 15, before it was revealed that those who haven’t accepted it will be able to use the app, but its functionality will keep getting depleted over time. This brings us to now when WhatsApp has made it clear that no functionality will be taken away from its users irrespective of their stance on the policy.

While that’s great news, our guess is that the annoying prompts asking you to have a look at the policy are all set to get peskier.