WhatsApp’s releasing a brand new update for its Android beta which allows users to notify their contacts when they switch to a new number. It’s a small, but significant change which will make the transition a bit easier for everyone.

To recall, the current Change Number option lets people modify their number and migrate details like their WhatsApp account information, settings, and groups. Speaking of, only groups which the person is a member of would get notified of the transition. This meant that the user had to manually tell their contacts about the change.

WhatsApp’s revamped Change Number feature makes things a lot smoother and automatic. The initial few steps are the same. An individual would have to go into the app’s Settings page, followed by Account, and finally Change Number. They’ll have to input their new and old numbers at this point. 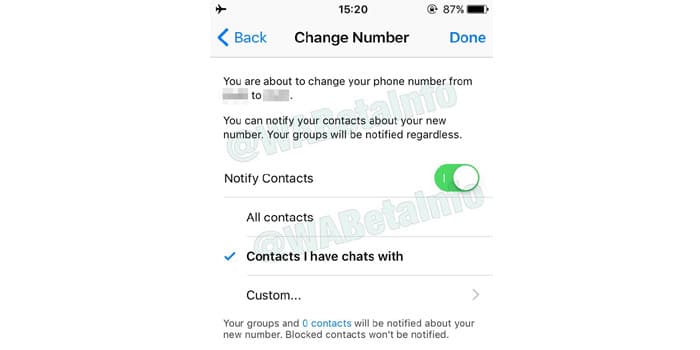 Once this is over and done with, tapping on Next will bring up a “Notify my contacts” toggle. If not activated, WhatsApp won’t tell anyone except the groups you’re part of about the switch. If it is activated, the app will present you with 3 options.

One lets you inform all your contacts, the next lets you tell the people you have chats with, and the last narrows it down to a custom list. Note that blocked contacts won’t be notified about the change, no matter which option is chosen.

WABetaInfo says that the new-and-improved Change Number tool is currently present in the latest WhatsApp for Android beta which can be download via APKMirror. Windows Phone and iOS should also receive it soon.