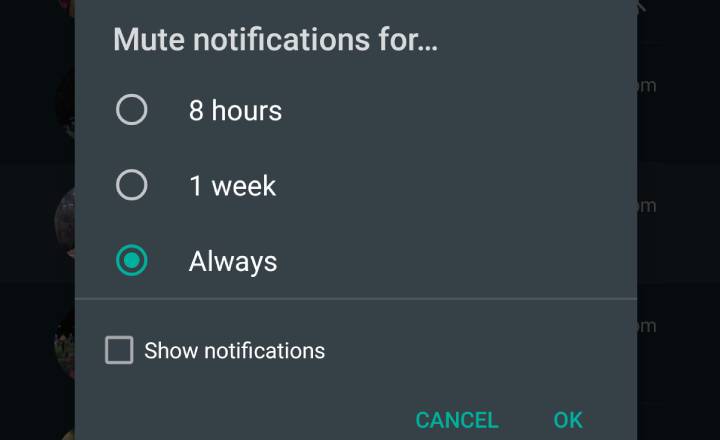 Remember that time a group suddenly started sending notifications despite the fact that you muted it. Well, that usually happens because the maximum time you can mute a group or a contact for is limited to a year. This changes with the new beta version of the app that’s live now. You can now finally mute a group or a contact forever. WhatsApp has released this feature through its latest beta versions for both Android and iOS.

Muting works just as it always has, but there’s a small change to the menu. The new beta replaces the ‘1 year’ option with ‘Always.’ However, this will still apply to your current phone, so if you end up switching to a new device, you’ll have to manage all your mute settings manually once again.

This feature is part of the WhatsApp 2.20.201.10 beta for Android and the 2.20.110.23 beta for iOS. The Android version also brings with it a new storage usage UI, which graphically represents how much of your storage is being hogged by WhatsApp media. And then there’s even a media guidelines feature that allows you to center-align stickers while sharing them with others or on your stories.

The iOS version doesn’t get these traits, but it does get catalog shortcuts. This puts a single call button in a business chat, which when tapped, allows you to choose the call type. All these features, as we said, are part of the latest beta versions that can only be downloaded by those who have registered to test them.

WABetaInfo notes that more proof of an expiring media option has been spotted that will allow you to predetermine how much time a photo or a video you share will stay on the recipient’s phone before getting automatically deleted. You can expect to see it in further releases.