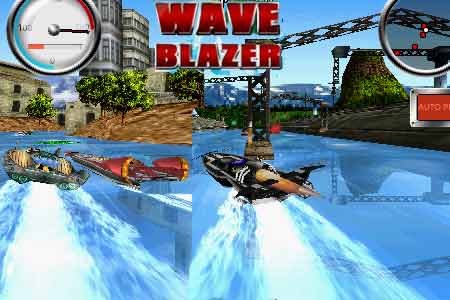 Polarbit who developed Raging Thunder game announced another game for iPhone and iPod Touch, Wave Blazer. It’s an online speedboat racing game with outrageous powerboats in the world. With the development of so many new exciting games via Polarbit, it has made it one of the most prominent developers of premium games on AppStore.

Wave Blazer features spectacular visual effects. The boats throw up a cascade of water as they fight against the waves. Wave Blazer offers both single player game as well as an online multi-player gaming. For single player, there are four different modes; championship, arcade, beat the clock mode and a fully stocked multi-player versus mode that allows the player to face the other players from the world. The game has beautiful 3D visuals which makes the game more interesting while playing.

“Raging Thunder and Crash Nitro Kart have both been extremely well received by gamers and in reviews the world over. Looking to our previous games, we definitely have a lot to live up to in terms of both visual quality and gameplay value. We are confident that we have managed to up the ante an additional notch with Wave Blazer and that gamers will be just as exited about it as they have been about Raging Thunder and Crash Nitro Kart.” said Janne Korpela, co-founder of Polarbit and lead developer of Wave Blazer.

Wave Blazer an online speedboat racing game will be available worldwide from the AppStore. The pricing details are not yet revealed.