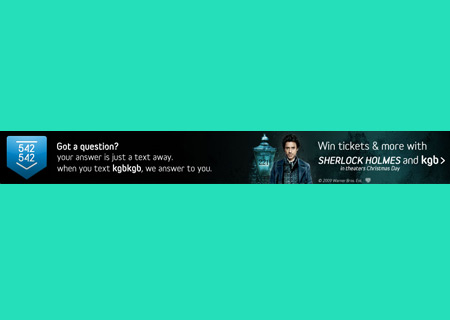 In a bid to win the rat race, film promotions have certainly become more and more innovative. The hottest way to promote a film now seems to be by using the medium of a mobile phone. With this platform, one can be assured to reach millions of people.

Well, Warner bros is collaborating with kgb 542542 for a huge cross-promotion with the studio’s much-eagerly awaited action adventure mystery film ‘Sherlock Holmes’. The film’s main starcast comprises of Robert Downey Jr. and Jude Law and will hit the theaters on December 25, 2009.

This multi-platform promotion program is all set to boast of television advertising, an online contest, national radio and in-theatre promotions. One of the major promotional campaigns is the mobile text promotion which can facilitate users to type the keyword SHERLOCK to 542542. By this, consumers can receive entertaining inside scoops about the movie and its characters for no extra cost even though usual handset messaging costs could be applicable.

Bruce Stewart, CEO of kgb Mobile and Digital, commented, “Warner Bros. has a reputation for staying ahead of the curve when it comes to identifying new avenues to reach and engage their audiences. kgb is uniquely positioned to build excitement for ‘Sherlock Holmes’ with our millions of text users who enjoy getting content and answers via text and mobile apps, and who have come to expect fun and entertaining content from kgb. Our partnership is a highly contextual fit between the greatest detective in history and kgb–the smartest text answer service in the world. We are a personal ‘answer detective’ for millions of users who send us tough questions every day.”

kgb’s 542542 text service can provide a potent platform to engage the audience by getting in touch with millions of users on their mobile phones even when they are busy. The company’s high-tech technology and expert Special Agents provide apt and precise answers daily on movies, celebrities, etc on any handset. By merging this mobile platform with television, radio and online elements of this program, one can actually offer a mutually-reinforcing and exceedingly effectual touch points to contact users across platforms.

kgb is all set to develop a new television ad that encompasses ‘Sherlock Holmes’ footage, which has begun airing from mid-December. The In-Theater, promotion includes tickets for advance screenings of ‘Sherlock Holmes’ in chosen U.S. markets. These tickets would come with a ‘Sherlock Holmes’ trivia question. One has to text kgb at 542542 to receive the answer.

A page on kgb’s web site would present users with the opportunity to participate in an online sweepstakes to win prizes, as well as advance screening passes to see the movie Sherlock Holmes, movie tickets, t-shirts, Sherlock Holmes posters and more. Radio campaigning can be enhanced with kgb offering prizes for on-air call-in promotions.

With this kind of aggressive campaigning, one can be assured of at least a huge opening for the film.