Vu Televisions has launched two curved TVs in its Luxury Series and two Smart TVs in the Premium UHD lineup. All the four variants have 4K Ultra High Definition Resolution and quad core processors. The company is giving a 3-year warranty with all the devices.

The curved TVs are available in 55-inch and 65-inch display models. Vu claims that a curved display gives a greater sense of detail while viewing. They run on Android 5.1 Lollipop and are pre-installed with apps like YouTube, Facebook and GoLive. 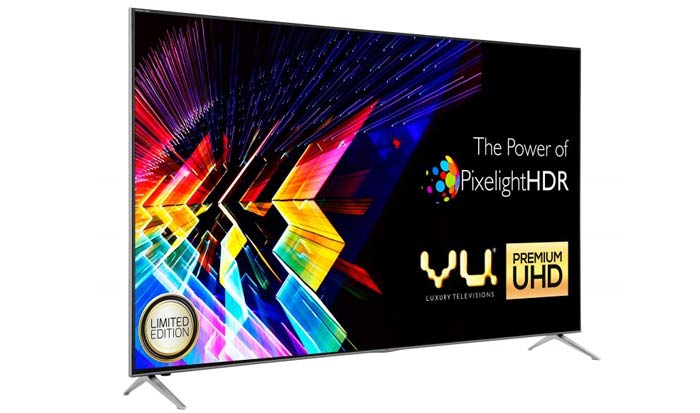 The two come with the nScreen app that can connect them with mobile phones using which media files from the handset can be shown on the bigger display. The 55-inch Vu Curved TV is available for Rs 100000, while the 65-inch variant costs Rs 180000.

The 65-inch model in the Premium UHD series has a 3840 x 2160p resolution. Vu is offering Netflix pre-loaded in the TV. There is a shortcut button on the remote to access the service. Other applications present in the device include YouTube, Opera Browser and Facebook.

Smartphones can be connected to the smart TV using Miracast to enjoy media from the phone on the bigger screen. Vu claims that the Premium UD series is the only one in India which offers A+ grade panels. The 65-inch variant will set you back by Rs 136000.

The 75-inch Premium 3D Smart LED TV hosts Pixelight HDR technology that increases brightness and picture quality on the display. It has built-in Wi-Fi and an Ethernet port. This model can support 3D viewing. It too comes pre-installed with YouTube and Netflix along with the Opera app store and a game center app. The device has Dolby Digital audio on board.

Let’s take a look at the features of the Vu Premium UHD 3D Smart LED TV:

The Premium 3D Smart LED TV is selling exclusively on Flipkart for a price of Rs 300000. The other model in the series is also being sold only through the e-commerce website.