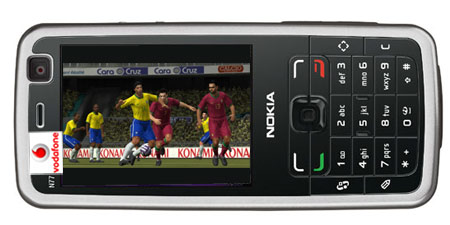 The name “Vodafone” comes from Voice data fone, chosen by the company to “reflect the provision of voice and data services over mobile phones”. The world’s leading international mobile communications group, “Vodafone”, headquartered in Newbury, Berkshire, England, UK, has announced Konami’s long anticipated Pro Evolution Soccer 2008 mobile game will be positioned across all of Vodafone’s territories over the coming months.

Pro Evolution Soccer 2008, a game that was officially announced on 18 June 2007, which is a video game in the Pro Evolution Soccer series by Konami, featuring a brand new intelligence system, called “Teamvision”. It will adapt and react to player’s gameplay styles and also ensure that the computer controlled opponents are always challenging and forcing the player to think and change their style of play to avoid being out-thought by the game. It will counter attack the target players’ weaknesses and look to exploit any repetitive tactics used by players. The concept of the defenders reacting better to danger, charging at shots, making more intelligent runs into space, ensuring quick and fluid passing and speedy attacks can be build. PES 2008 will be released for Windows, Wii, Nintendo DS, PlayStation 3, PlayStation 2, PlayStation Portable, and Xbox 360.

Pro Evolution Soccer 2008 was developed and published by Konami Digital Entertainment and will be distributed and co-marketed by Glu. It will be the first mobile soccer game that allows the player to play football one’s own way with a unique one button control system perfected for mobile gaming. It features superb graphics and animation, exact ball physics and unbelievable game play, Pro Evolution Soccer 2008 will be the most realistic and playable football experience ever seen and played on mobile.

Vodafone aims to launch two hero titles every year. After extensive collaboration with its local markets and careful examination of the co-marketing, handset and promotional support that was offered by Konam and Glu Mobile, Vodafone selected Pro Evolution Soccer 2008.