Home Other Brands Vivo V5 Plus to hit India on January 23 with dual front...

The Vivo V5 Plus is an upcoming phone which has only been teased once by its makers during the release of their regular V5 model. But an invite to a launch event on January 23 has made it clear that the smartphone is ready to hit the markets now.

The most striking aspect about the Vivo V5 Plus is its dual front camera system. Focused towards taking detailed selfies, it is expected to offer high levels of depth of field and several other camera tricks.

Vivo has focused a lot of its attention on selfie enthusiasts. This is clear not only from the upcoming Plus model, but also the regular V5 phone which comes with a whopping 20MP front shooter. In contrast, its rear camera offers just 13MP photos. 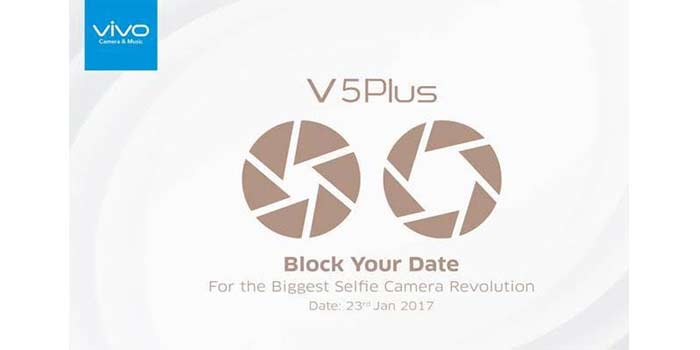 Another selfie-focused feature of the Vivo V5 is its special front facing flash which is called Moonlight flash. It actually produces diffused light to not spoil the selfies with too much harsh exposure.

Coming back to the V5 Plus, nothing much is known about this device as of now, but we do know that it’s not the first phone to provide a dual front camera setup. The Lenovo Vibe S1 which came out in 2015 took a similar approach to please fans of selfies. With that device now outdated, Vivo’s offering has a good chance of appealing to the target audience.

Come January 23, we’ll bring you all the necessary details about the Vivo V5 Plus, including its price; so stay tuned.