The Videocon Infinium Z50 Nova is the latest addition to the company’s ultra-affordable smartphone lineup and it’s also a cheaper version of the Z50 Quad which went on sale back in November this year. The newly released device is priced at Rs 5999 and it offers a decent set of features.

The Videocon Infinium Z50 Nova looks similar to the Z50 Quad version. And while it may be cheaper than the latter handset, it does offer slightly better features in comparison. The rear camera has been bumped up to 8MP and it has a Sony sensor with an LED flash. Apart from this, everything else looks to be pretty much the same. 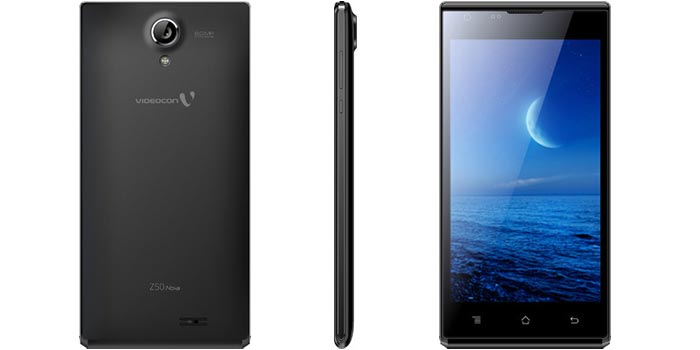 The Videocon Infinium phone comes with Android 4.4.2 KitKat preloaded and the company is throwing in various goodies too. You’ll get a free 90-day subscription for the V-Secure and V-Safe applications, and pre-installed content such as GT Racing 2, Modern Combat 4, Fun Zone and Hungama.

This Videocon handset sports a 5-inch qHD display and is powered by a 1.3GHz quad core processor. For memory, there’s 8GB of inbuilt storage, a microSD card slot that supports up to 32GB and an entire gigabyte of RAM. Other features of the phone include a 2MP front camera, 3G connectivity, dual SIM card slots, FM Radio and a 1900mAh battery.

The Videocon Infinium Z50 Nova is available for purchase exclusively through Flipkart in options of black and white.