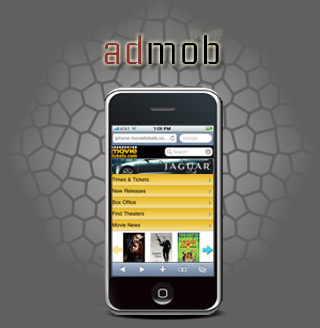 New social, search and rich media ad units are introduced for the iPhone by Admob. It provides service on premium sites and applications reaching 19 million plus, iPhones and iPod Touch gadgets worldwide in 2009. Admob is actively functioning with the application developers, helping them to prepare the new iPhone 3.0 Operating System. It envisages introducing a new edition of its iPhone software development kit today.

“Mobile advertising is rapidly maturing, and we believe the iPhone is leading the industry forward. Advertisers are excited to connect with consumers in new ways on the iPhone through social and rich media ad units that deliver increased impact and engagement. AdMob is helping application developers build a business model by making it easy for them to instantly monetize their iPhone applications. All the hard work by developers to create great applications is a major driving force behind the massive growth in consumer usage of applications.” remarked Jason Spero, Vice President and General Manager, North America, AdMob.

Searching of mobile site is now easy where users can directly key in the query into an ad unit. The Multi Panel Banner feature permits users to interact with multiple calls to action in a single rich media ad unit. Scrolling canvas comprises of dynamic, scrolling ad unit which provides detailed information effortlessly.

The new version of iPhone SDK brings about an improved experience for consumers. It has the ability to dynamically update a given advertisement’s look and feel. This in turn benefits developers to better monetize their applications. Over 1,500 iPhone applications, including Brainteaser, Sports tap, and Tap Tap Revenge II are monetized from Admob. These are accessible to over more than half of all the iPhone and iPod touch devices. Thus providing developers an immediate business model for the fun and compelling applications they create.

These new ad units will be available in early July.