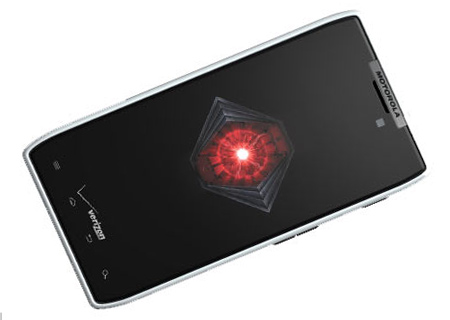 It is not just the Xyboard tablets that Verizon Wireless has in the offing for the festive season and fans can also look forward to a snowy white Motorola Droid Razr from the network carrier. The handset was originally launched in a shade of black back in November.

After it was spotted in the wild early this October, the Gingerbread powered smartphone first went to the aforementioned network operator, something which should have been evident from the Droid prefix which tags along. Back then, it was called the Motorola Spyder. This was followed by speculations of the handset coming through AT&T and these haven’t come to fruition till date. Nonetheless, the phone has crossed borders to reach nations like the UK, China, and India.

We do not expect any internal changes in the Droid Razr dressed in white, as compared to the original one. A look at the specifications of the device divulges a 1.2GHz processor, 1GB RAM and more. Its 4.3-inch Super AMOLED Advanced display sports Corning Gorilla Glass on the forefront, while the body is protected with Kevlar fiber. For avid photographers, the handset is equipped with a rear facing 8MP camera. If that doesn’t seem enough, the front panel also shows off a 1.3MP one, mainly for the purpose of conference calling and video chatting.

The Verizon Wireless Droid Razr white edition price tag reads $299.99 and it will require users to sign a new two-year user agreement. Additionally, subscriptions to a Verizon Wireless Nationwide Talk plan starting at $39.99 per month and a smartphone data package will also be needed.