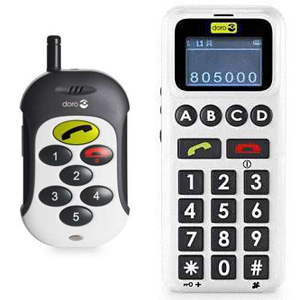 A Sweden-based company, Doro, has recently launched two new mobile phones “HandlePlus” and “HandleEasy” that can be considered the simplest ones in terms of user-friendliness in the market today.

The Doro HandlePlus 324gsm has only seven buttons but does not have any display screen, with up to five numbers able to be pre-programmed on this ergonomic handset. The handset is described as perfect for consumers with limited hand functionality or merely looking for a simpler alternative to current consumer phones. The HandlePlus 324gsm, it is priced at $160 or £79.99 and can be purchased from BioAcoustics.

Mobile phones are used by everyone, from youth to the elderly people. According to Doro the handsets are suppose to be for users who have hand disabilities or simply for other persons that want a basic phone instead of something with the latest technology.

The important thing that a person should be aware of while purchancing the mobile is that these mobile phones are not equipped with camera or Bluetooth or WiFi or any of the high-tech features that you see in current phones.