Makers of the UC Browser for Android have released an update for the software through the Google Play store, instilling it with fresh new changes that look to provide an even faster browsing experience. The upgrade pushes the app’s version to 9.4, and can be downloaded now for devices running Android 2.1 and up.

This browser, developed by Chinese company, UCWeb Inc. now features support for the Hindi language. Moreover, it also brings in a new trait called AutoPager. What it does is that it automatically loads the next page for relevant sites, so that by the time you reach the end of the first one, you won’t have to wait for the other to load, thus providing a seamless reading experience. 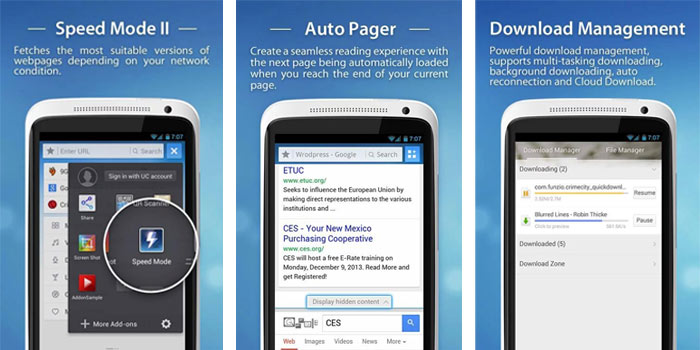 UC Browser’s Speed Mode also receives major enhancements, allowing it to display the most suitable versions of concerned webpages depending on your network condition. The new update for this app even boasts of double the download speeds than the ones which were offered earlier.

Furthermore, the application now lets you download photos from Facebook directly to your phone if you happen to be accessing the social network through the browser. UC Browser’s Save Page add-on has also been updated along with the app, while a new add-on titled Facebook Video Uploader has been added to the store, letting you do exactly what it sounds like.

Like we said, the UC Browser for Android update is live now on the Google Play store, so those who already have it installed on their device should get a notification sooner rather than later.