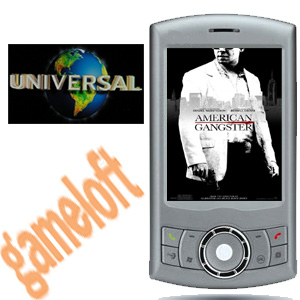 Michel Guillemot, president, Gameloft says,“With their intriguing storylines, identifiable characters and intense action, crime dramas are an ideal backdrop for mobile games. We plan to work closely with Universal Pictures to deliver a powerful action title that is both a solid extension of the film’s storyline, as well as a memorable and quality mobile game experience.”

Gameloft’s American Gangster is set in the Harlem of the 70’s. It’s a mobile game that will take players deep into the film’s vice-laden setting as players either work their way up the ladder of the underworld as Frank Lucas or try to take down the crime empire as outcast cop, Richie Roberts.

American Gangster: The Mobile Game promises high-paced action and thrills that will be the hallmarks of the film. Players have to face challenges in 40 missions and have a choice to play both crime lord, Lucas, and good cop, Roberts.

The 40 missions include setting up a weapons trade, eliminating enemy bosses and taking on a snitch in Lucas’ gang. Ultimately the game comes down to firepower and influence, and only the player who has the most of both will survive.

“Gameloft’s focus on quality makes them a perfect partner for this film,” expressed Jeremy Laws, Senior Vice President of Universal Mobile Entertainment. “American Gangster: The Mobile Game is the perfect mobile complement to this powerful film.”

American Gangster: The Mobile Game is now available through a number of American carriers.