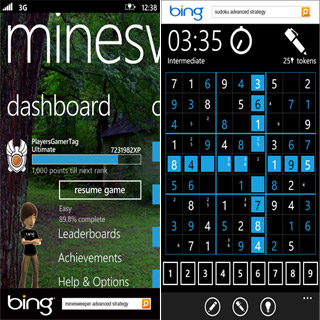 The official Windows Phone blog has announced the availability of two popular official Xbox Live games in the U.S. Marketplace for the Windows Phone. The two classic puzzle games are Minesweeper and the mind-boggling Sudoku.

These games will give fans of the Xbox a reason to cheer as they are the official versions and come with unique powerups and achievements. The aim of the Minesweepers game is to clear the board with the help of flags for safely marking potential hidden mines. This game needs precision and a wrong move by the player can end the game. The Windows Phone version offers two modes to gamers, classic and speed, each of which comes with four varied levels of difficulty.

In the logic game based on Japanese numbers, Sudoku, players have to fill a 9 x 9 grid with numbers from 1 to 9. Although it sounds simple, the game is anything but that. Gamers are enabled to play it in the classic or lightning mode.

The blog reveals that the ad-supported version of the official Xbox Live games, Minesweeper and Sudoku can be downloaded from the Windows Phone Marketplace (U.S.) for free.