Twitter has updated its Android application to display a dedicated WhatsApp button which enables users to share posts with others directly on the IM service. Through this, they will be able to conveniently send a tweet through a link to someone on their contacts list or a group without much hassle. The latest release of the app also tags along several improvements and bug fixes.

Before the new update, Twitter Android users had to use the generic share button and then select WhatsApp from the list. While this procedure isn’t really time consuming, having a dedicated key for the popular IM will make things simpler, especially if you’ve got a large number of apps installed. On the downside, you’ll only find the key when viewing a tweet independently, while other pages will bring up the normal share button. 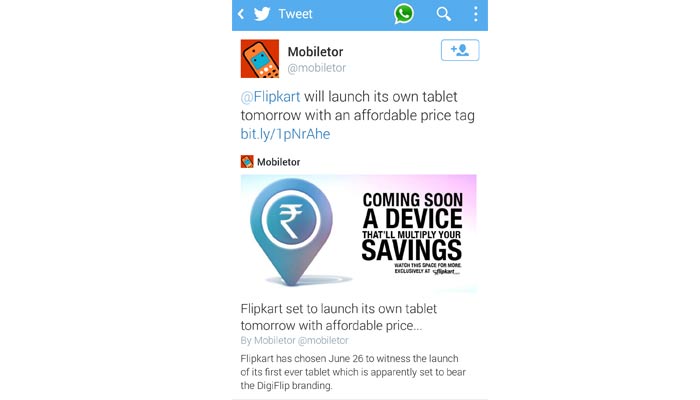 Another noteworthy fact is that hitting the WhatsApp button for some devices will take you directly to the IM application to select a contact or group, while on other devices, you’ll be able to put in a comment before sharing a link. By the looks of things, the feature seems to be experimental and we’re hearing that it’s available to mostly users in India. Also, Twitter hasn’t gone on the record about the new capability. In other news, the SNS is planning to experiment with the way users retweet. According to TechCrunch, the company might replace the ‘quote tweet’ option with the ‘retweet with comment’ feature.

As mentioned above, the WhatsApp share button can be accessed through the Twitter Android application. Also, there’s no information on whether this capability will be available to iOS users as well.