Home Apps Twitter boasts of a common thread for Android and iOS, chat away...

Twitter has so far been considered as the hub of all ideas and opinions, but it cannot exactly be called an ideal platform to hold a conversation, especially with the tweets and replies scattered all over the place. But that has finally changed. Twitter announced on its official blog hours ago that together with Android and iOS apps, it has tweaked the website so as to make following threads more convenient.

Now every tweet will be linked to all the replies with a vertical blue line. Not more than three responses will be seen initially, but users can choose to browse through the entire session by tapping the conversation. Hit reply to be a part of any such discussion. People can rest assured that no one besides the people they follow or those they’re replying to, can see such responses. 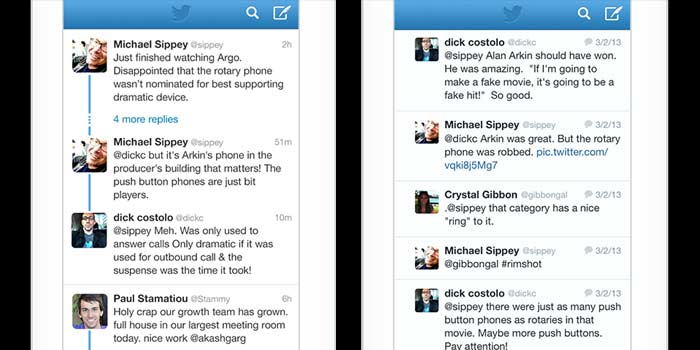 Even sharing conversations through mail has been made easier for Android, iOS and the desktop version, the company has claimed. Those with devices running Google’s mobile platform can also disclose the discussion details over direct messages. While Twitter app for iPhone already sanctioned reporting any tweet for abuse or spam, this feature has now come to the other platforms as well.

It may please some to learn that Twitter has gone entry-level smartphone-friendly. It has shed half its size to make downloading the service faster than before. Moreover, the app has yanked in a fresh batch of notification settings for Android as well as iOS. So check out the Google Play store and iTunes or visit https://twitter.com/ to sign up.