If over-sharers are making your Twitter timeline get updated quicker than you want it to, the new mute button will let you tune out such tweets. That’s right, it’s similar to the ‘I don’t want to see this’ option on Facebook which lets you blank out a post from your feed. Two other choices for letting you Unfollow the person who put up the content in question or avoid seeing posts from the original sharer’s account are also available.

Twitter’s mute feature is a simpler option which gives users the ability to kick tweets from over-sharers out of their timeline with the exiled party not even being aware of this. Muting a person on the website won’t lead to you ‘unfollowing’ them and it’s just their updates which will be prevented from polluting your timeline. So if you must follow someone but find their tweets to be offensive or too many in number, the solution is here. 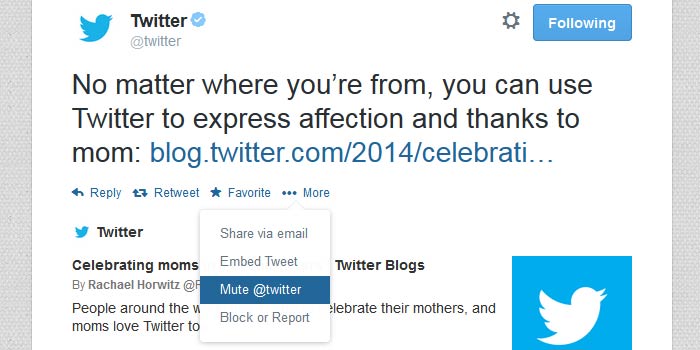 First of all, you can’t go around muting just about anyone who annoys you on Twitter. You have to be following the concerned account in order to perform this action. The mute button can be accessed from within a tweet or by simply visiting the profile page of the ‘offender.’ To do the former, you can go to More at the bottom of the tweet and pick the mute option. The same action can be executed through the drop-down menu under the gear icon on the profile you’re visiting. 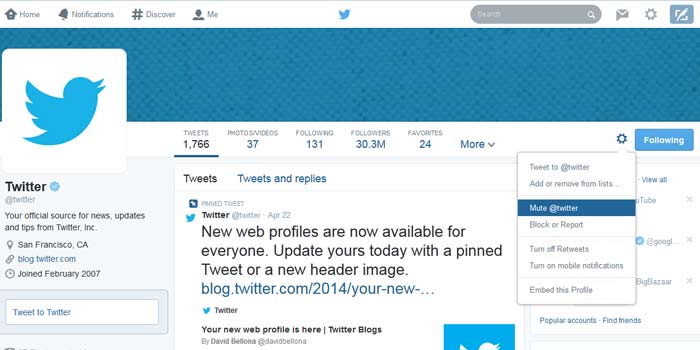 The Twitter mute button can be a pretty useful option at times. Say, a company’s account that you follow is running a promotion you’re not interested in and it keeps retweeting participants who may have to answer a question to win, temporarily tuning out such tweets rather than ‘unfollowing’ the brand may be a better way to go about things. The new feature is accessible on iOS and Android devices too.