Everyone’s favorite caller ID and call-blocking app Truecaller, is celebrating a new milestone even as it has managed to get more than 100 million people to use its services globally. Indian customers form a massive chunk of this morsel seeing as the company had recently announced that the nation accounts for 45 million of its total users, to which 600000 new ones are being added every week.

It has also been revealed that Truecaller has doubled its daily count of new users in a span of less than three months. All the figures include those who employ the app on not only Android, iOS and Windows Phone, but also BlackBerry, BlackBerry 10, Symbian and Series 40 platforms. 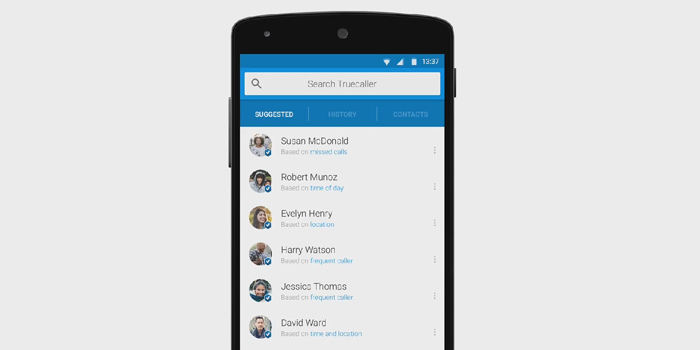 With this announcement, the developers of this utility have also showcased some new features that have made their way into this application’s Android version. A new way to search for numbers has emerged, with the main search bar now being able to work in real-time to display the relevant information based on names or numbers you enter. It will of course look through Truecaller’s massive 1.5 billion-strong database, apart from your own contacts list.

Truecaller has been given powers to make it your default calling app as well. Once you open it, it displays suggested contacts based on time of the day, the location you’re currently at and other such factors. Moreover, you can even swipe left or right in order to send a text to them or call them, respectively.

Although the new features have only been doled out for the Android version of Truecaller as of now, they will indeed be made available on other platforms in the future. The updated app is live now on the Google Play store.