The holiday season officially begins and Google has as usual decided to mark its arrival with a special ‘Tis the season’ doodle to greet you when you hit the search website. This year’s focus is on the familiar phrase that you hear around Christmas time and the image goes on to depict a bunch of children riding a sleigh.

The new Google Doodle is not interactive one, but it’s certainly an animated one. It shows a group of three children riding a sleigh during snowfall. A man is seen controlling the sleigh and a happy reindeer is shown to be pulling it. While the image right below is a screenshot of it, you can scroll right down to see the actual animated version. 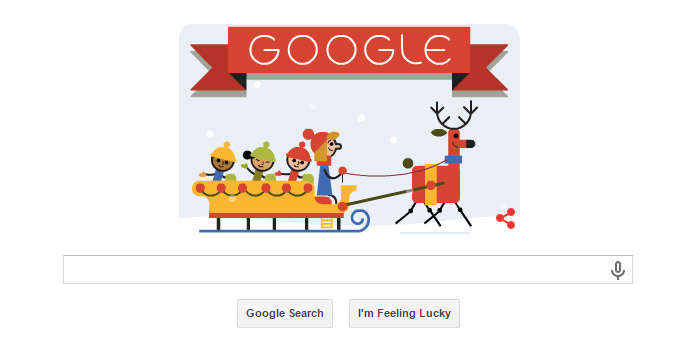 Like always, this doodle can be shared in the form of a link or via Facebook, Twitter or Google Plus. For those who don’t know ‘Tis the season!’ is an expression that refers to the holiday season and also to the festival of Christmas that’s celebrated world over on December 25 every year.

‘Tis the season!’ is also the starting line of a Christmas carol, while in popular culture, it can refer to an album by Vince Gill and Olivia Newton-John and many other things. Google has kept alive its tradition of releasing a holiday doodle every year, which it’s been doing for the last ten years. Last year’s image showed a lone house standing amidst heavy snowfall.

‘Tis the season!’ may be a Google doodle to celebrate the holiday season, but there’s bound to be one more big doodle this month that will celebrate Christmas, so keep an eye out for that one. And then there’s the traditional one for New Year to look forward to also.