Scientists have designed a 3D printer called Carbon3D that produces items out of liquid resin that looks to be inspired from the scene in which the T-1000 emerges from molten metal in the movie Terminator 2. Conventional 3D printers generate material by printing multiple layers over each and take a long time to do so. However, the new method employs UV light, liquid resin and oxygen to form articles in a lesser amount of time and the objects will theoretically have more strength.

The team of inventors which consisted of several chemists and physicists, took two years to develop their innovative concept. The unique 3D printing technique was recently presented at the TED conference by Joseph DeSimone, one of the group’s co-inventors, and thee work was also published in the Science journal. DeSimone feels that traditional 3D printers are inappropriately named as these use the 2D printing method of applying multiple layers to create three dimensional objects. 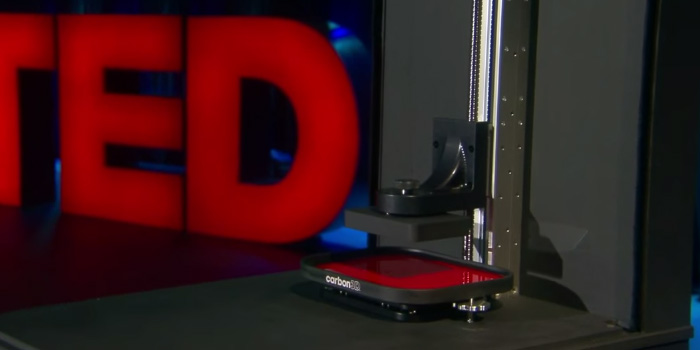 The uniqueness of Carbon3D is that it creates items by manipulating the chemical and photo-reactive property of liquid resin, thereby drastically increasing the speed of manufacturing time to between 25 and 100 times more than that of conventional 3D printers. In the new device, DeSimone and his colleagues use a new technique called Continuous Liquid Interface Production (CLIP) which plays with the property by which oxygen can prevent the resin’s solidification while UV light can cause it to solidify.

In an nutshell, the CLIP system has a special window that controls the light and oxygen passing through to the resin. During the printing process, a light-based image of the desired object is projected into the liquid. The amount of light and oxygen present in the resin is minutely manipulated and monitored to gradually form the item which is pulled out of the molten fluid.

According to DeSimone, this new 3D printer has the potential of generating material with better elastomeric properties, apart from strong and smooth objects.