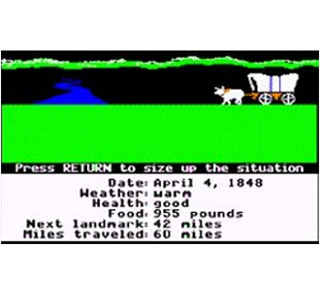 As mobile gaming gets more and more sophisticated, many video game developers are now open to launching their games on mobile phones. The latest to join the bandwagon is Gameloft, who recently launched their educational game, The Oregon Trail, on mobile handsets. They have partnered with The Learning Company in the first remake of their educational title.

While retaining its traditional flavor, The Oregon Trail also caters to a new age audience. Gonzague de Vallois, Senior Vice President of Publishing, Gameloft, elucidates, “The Oregon Trail is an iconic game that has been enjoyed by parents and students alike over the decades”. He further added, “The Oregon Trail has always provided an ideal way for players to recount an important part of American history, and we are confident that the new mobile version will capture the exciting journey for today’s tech savvy audience.”

The basic storyline of the game remains the same, i.e., the players assume the role of a wagon leader and must make strategic decisions to ensure the safety of their party along the treacherous Oregon Trail route, but it has been enhanced by modernized graphics and other added features.

The Oregon Trail includes features such as allowing the player to choose his\her profession such as Banker, Carpenter, Farmer; s\he can choose the crew by customizing the names, in which she can also include family members’ names; then the player embarks on a long journey which is broken down by five different mini-games which also allows the chance to improve health and safety through hunting, rafting, fishing, crossing the river and repairing the wagon. In case it does not seem challenging, the unpredictable appearances of hitchhikers, bandits and robbers demand strategy and smart decision-making abilities that may minimize the damage.

Thus The Oregon Trail is all set to appear on the mobile gaming scene. With its content designed around American history and culture, it’s an educational opportunity that will now fit into one’s pockets.