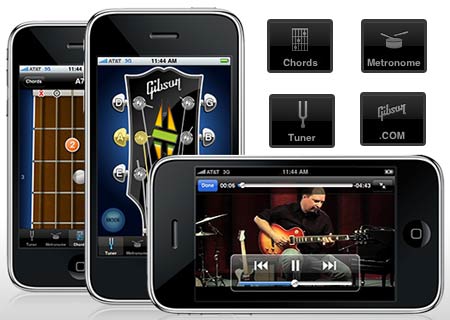 Playing guitar is no more a challenge for those devoted to the basics of music. Gibson Guitar has recently released the highly anticipated Gibson Guitar App for iPhone users. The new app comes with a number of special features, such as a traditional chromatic tuner which starts in ‘All Notes’ mode that tracks whatever is played.

With the app, users can choose a tuning on the ‘Mode’ page so the tuner will only track notes for that particular tuning. The standard chromatic tuner feature enables less advanced users to tune to Standard tuning Open G, Open D and more, by touching the key. Apart from this, the Gibson headstock inlay will automatically change color, indicating if the string is sharp, flat or in tune.

Guitar fiends or guitarists can also choose a specific BPM or tap the screen three times to automatically set the tempo, thanks to a standard metronome. Other highlighting features of the app include over 30 chord charts with finger markings to help the user with mastering the cord.

On the other hand, those who prefer to learn new guitar riffs, licks or chord sequences via video tuition can now have that option from their Gibson app. The app will be updated frequently with new video content so enthusiasts of all guitar ability can improve their technique with utmost ease.

Further, with the Gibson.com option, users can keep up with everything Gibson Guitar related, including the announcement of new products, artist activity, news stories, interesting and factual features, exclusive contests and special events.

The Gibson Guitar App can be snapped up for free from the Apple App Store.