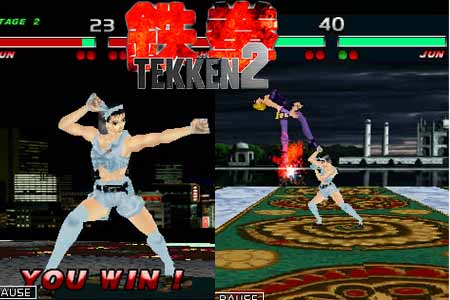 TEKKEN 2 dares the players to master 10 hit combos, crushing counters and powerful moves as they challenge the seven characters to win the Iron First Tournament. The players are allowed to select one of the three fighter characters each having its own collection of special attacks and movements to defeat the opposition. The player will thoroughly enjoy this fast paced game with 3D graphics. The players involved with the game are; Jun, Heihachi, Nina, Kazuya, Paul, Yoshimitsu, Devil and Angel. In original mode the players can enter the Iron First Tournament or can test their stamina in survival mode.

“We’re excited to be the first in the United States to bring this popular game to our customers,” says Ed Ruth, director of digital media at Verizon. “By bringing Namco’s ‘TEKKEN 2’ to Verizon Wireless customers, we’re giving gamers a chance to experience the thrills and excitement of this game wherever they are using the Verizon Wireless network.”

“‘TEKKEN’ is one of the most popular and well-known fighting games available, and its mobile debut is as exciting for amateur fighters as it is for series veterans,” comments Scott Rubin, senior vice president of sales and marketing for Namco Networks. “In addition to giving consumers the ability to play anytime and anywhere on their Verizon Wireless phones, the optimized controls and the one-button special attacks make it easy for anyone to fight like a pro.”

The TEKKEN 2 action packed game is available now on monthly subscription fee of $ 3.99 and for unlimited use for $9.99.