Tata Docomo has announced the launch of its Broadband Express campaign which it’s using to promote its wired internet service in India. Under the new initiative, the network provider will be offering new subscribers extra goodies and there are prizes to be won as well.

Tata Docomo has revealed that all new customers on the Rs 899 plan and above will be entitled to a free Wi-Fi router. And not just that, they will also get a chance to score some big prizes like the iPad mini from Apple and curved OLED TVs. Just so you know, the promos being offered under the Broadband Express campaign will only be valid until the end of this year. 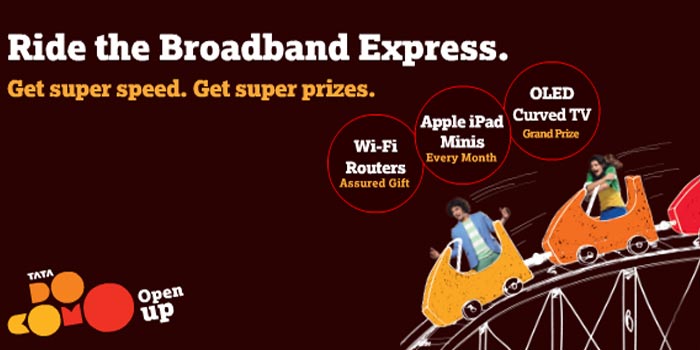 Tata Docomo’s wired broadband services offer plans with download speeds ranging from 1Mbps up to 100Mbps. Prices and subscriptions vary based on location and there are three tiers of options being offered, namely power, lightning and limitless. The first choice is for light internet users, the second being aimed at data hungry customers and the last is designed especially for those requiring an unlimited connection.

In recent news, the service provider joined hands with the New Delhi Municipal Council (NDMC) to bring free wireless internet access to the Connaught Place. The Wi-Fi zone was successfully launched on November 16 and it offers limited web browsing at no cost, following which customers will need to buy top-ups.

To participate in the Tata Docomo Broadband Express promo, you can head over to the dedicated website and fill up a web form with the necessary details. There’s a ‘Terms and Conditions’ sections that should give a read and a separate page providing a breakdown of the offered plans.