Home Apple T-Mobile to offer iPhone in Germany without Contract 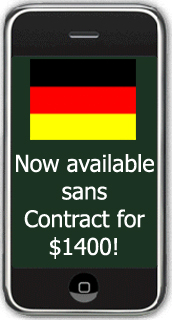 T-Mobile, a Deutsche Telekom network provider is now offering its users in Germany the chance to purchase Apple’s iPhone without signing a contract.

Since Vodafone has acquired a court injunction against T-Mobile, the latter will have to sell the iPhone without a contract.

The users who have already bought their iPhones after 19th November 2007 in Germany will not have to pay any charges for unlocking the iPhone so they can use the handset with any other SIM cards.

However, those who purchase the iPhone without a contract will somehow not be able to make use of the music playing Web-browsing iPhone offers.

T-Mobile has planned to sell the iPhone at a higher price of 999 euros ($1,400) without the contract at its outlets. But, T-Mobile will also continue to sell iPhone for 399 euros ($590) with the two year contract.