Home HTC T-Mobile Shadow Smartphone launched in the US 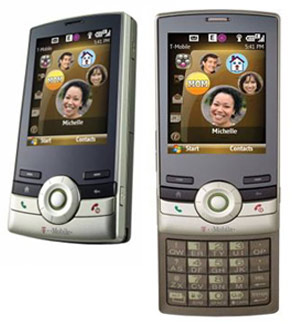 T-Mobile USA, Inc., has announced the upcoming availability of the T-Mobile Shadow. Designed significantly to reduce the complication that is often associated with many feature-rich devices, T-Mobile Shadow is the first phone that is a planned franchise of phones under the Shadow brand.

The effort to reduce the complexity of staying connected to important people began years ago with the introduction of the T-Mobile Sidekick family of devices. They were designed to make calling, texting and instant messaging much easier just as young adults were beginning to embrace these new forms of communication.

Shadow is a sleek, slider designed phone consisting of a QWERTY keyboard that includes a slide-out keypad with 20 buttons and predictive text, a large screen, and a spin wheel for navigation. The device is integrated with the Microsoft Windows Mobile 6 platform. It holds a spin navigation wheel, making it easy to scroll core phone features. Shadow has one of the largest, most-radiant screens on any T-Mobile phone.

The quasi-smartphone is empowered by 2.0 megapixel camera with video capture, and authorizes the users not to miss any special moment. It also accepts WiFi to support faster speeds, while it only runs off of an EDGE network. An array of lights and sounds is the most fascinating part of the handset. Different lights differentiate one function from another, whether you’re receiving an e-mail, picture message or calendar appointment notification. A multimedia player provides a convenient way for entertainment, by listening to and sharing favorite music and video.

T-Mobile Shadow being amongst the latest wave of phones provides an address book that lets the users easily find contact information from Yahoo!, Gmail, Microsoft Outlook and other e-mail services by using my.t-mobile.com. The additional “reminder feature”, ensures that customers never forget their friend’s or family member’s birthday or anniversary, with the ability to set reminders for these important days in the lives of their ‘fave five.’