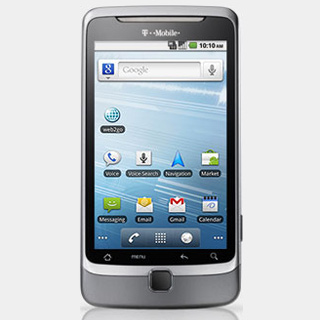 Around few days back we reported that T-Mobile G2 with Google handset will indeed run the engaging Android 2.2. Well, mobile enthusiasts can cheer as T-Mobile has now unveiled the highly anticipated G2 smartphone which enhances the web browsing experience with downloads at 4G speeds. The handset claims to be the first smartphone specifically developed for T-Mobile’s new HSPA+ network.

Powered with Android 2.2, the G2 handset bundles together seven customizable home screen panels, including the dedicated panel that offers easy access to various exciting Google apps and the Android market. The mobile data experience is advanced with built-in Google Voice and Google apps like Voice Actions and Google Goggles. The phone claims to be the first to feature Google Search and enables owners to manage their phones with their voice for calling contacts and businesses, sending messages, browsing the web, listening to music and completing common tasks.

“T-Mobile ignited the spark that set the Android world ablaze two years ago with the launch of the world’s first Android-powered mobile phone, the T-Mobile G1, which remains an important milestone for both T-Mobile and the Android operating system,” commented Cole Brodman, chief technology and innovation officer, T-Mobile USA. “Now, with the launch of the T-Mobile G2, we are re-teaming with our partners at Google and HTC to provide T-Mobile customers with another first the first Android smartphone designed to deliver 4G speeds on our new network.”

The Google Voice feature helps users create a new account directly from the home screen with the help of their present mobile number. Further, Google Voice intuitively transcribes voicemails to text, thereby enabling users to read them like a e-mail or text message from their phone or online. Apart from all these handy features, the G2 includes Google services like Google Search, Gmail, Google Maps with places and navigation, YouTube, Google Talk and Google Earth.

“One of the advantages of an open platform is the opportunity for developers to create rich mobile experiences and seamlessly get those experiences into the hands of consumers,” remarked Andy Rubin, vice president, engineering, Google. “From new services, such as Voice Actions, to mobile applications, developer-led Android innovation is flourishing. On Android Market alone, the number of applications available to consumers has grown from just 50 applications two years ago to more than 80,000 applications today.”

“Two years ago, HTC and T-Mobile worked together to deliver the world’s first Android phone, the T-Mobile G1. From that start, Android has grown to be the leading smartphone platform in the U.S., and one of the most popular globally,” quoted Peter Chou, chief executive officer, HTC Corporation. “With today’s announcement of the G2, HTC and T-Mobile are once again bringing a breakthrough Android product to market.”

The G2 sports an HD video camera which enables users to record vibrant, high-definition (720p) videos that can be immediately uploaded to their Photobucket account. Owners can capture crisp images with a 5MP camera which sports LED flash and autofocus. Besides, the smartphone lends support to Microsoft Exchange e-mail, contacts and calendar, social networking and instant messaging. Apart from the music player, the device flaunts its integrated 4GB storage capacity. Additionally, the G2 wraps together a 8GB microSD memory card which can be further extended to 32GB.

The G2 will be available in the U.S. through T-Mobile and T-Mobile users will have the opportunity to preorder the exciting G2 in limited quantities later this month. However, additional availability details will be revealed in the coming weeks.

Pixel 6 Could Ship With UWB Support For Tracking Devices