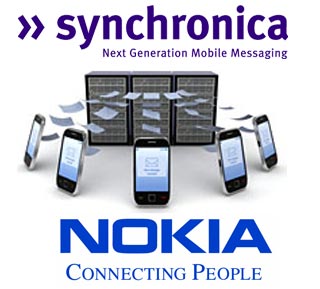 Synchronica is an email and IM solutions provider to telecom companies. It appears to be in the company’s interest to acquire Nokia’s OBM business, an e-mail, social networking and instant messaging service.

The company plans to offer this service to various providers such as AT&T, Verizon, T-Mobile, Sprint, Rogers, Telus etc throughout North America. On further development the messaging software will be merged with the company’s existing products to create a mobile gateway infrastructure. The service will consist of many new features such as PIM synchronization and RCS instant messaging.

As part of the agreement, Synchronica will provide its messaging service while Nokia will continue pre-loading the software onto their Series 40 phones. The company estimates over six million subscribers in North America alone. Also they will continue to extend the service overseas to various carriers in Europe, Africa, Russia, and Asia. By doing so the company estimates to acquire around 1.8 billion users.

We’ll have to wait and watch how well the deal goes down among committed Nokia fans.