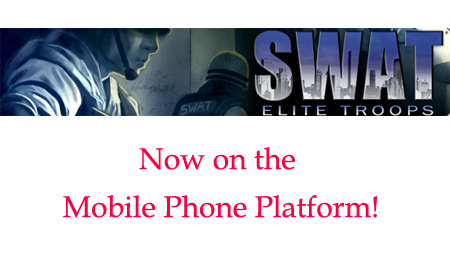 Award winning game SWAT Elite Troops will now be available on mobile phones. As announced by Vivendi games on 17th March 08, this game is all set to go mobile.

The game involves 16 interesting levels with access to weapons such as pistols, flash grenades, electric stun guns and a lot more. Vivendi has ensured that a mobile user gets a rich gaming experience on the mobile phone as well.

The game has one character as the SWAT leader and he guides his three officers to beat the enemies and rescue hostages utilizing special SWAT techniques and the highly efficient choice of weapons. The SWAT Elite Troops is not a mere shooting game and involves a lot of tactical thinking and intelligence to survive through the levels

SWAT Elite Troops is available currently on mobile phones in North America and Europe. Although one may ponder as to how one can pass through all levels, the control keys are easy to use, making the title quite a treat.