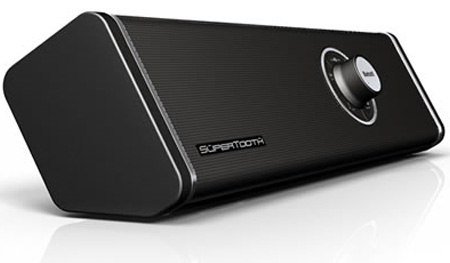 Music fanatics can now look forward to enjoying their favorite tracks anywhere and at any time with this new portable offering. SuperTooth has unfurled its portable stereo speaker dubbed SuperTooth Disco that is compatible with any Bluetooth A2DP device including the Apple iPhone.

The sleek and compact SuperTooth Disco can stream music from gadgets such as MP3 players, PCs or mobile phones that support Bluetooth A2DP technology including the iPhone, iPad and iPod touch. Music lovers can enjoy innumerable tracks anywhere they want wirelessly for an easier experience with this portable device.

The speaker is touted to produce 28W of sound by employing its 12W subwoofer and two 8W stereo drivers. With its integrated rechargeable battery, users can blast high-volume music for around three to four hours while playing tracks on moderate volume for up to ten hours.

The device comes equipped with external controls such as play, stop, pause, forward, backward/rewind and bass buttons. It sports a 3.5mm stereo headphone jack for audio I/O and a charger port for powering it up. The various contents that come packaged with the speaker includes a 3.5 audio jack cable, travel charger, holster and user manual.

The SuperTooth Disco can be purchased via Amazon at prices ranging from $144.93 to $175.69, depending on which device it is intended to be used with.