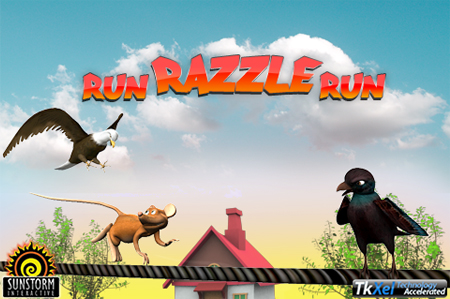 Sunstorm Interactive releases a new action-packed game called the Run Razzle Run for the iPhone. The Run Razzle Run promises to take users back to the traditional arcade action. It offers a unique gameplay as Razzle the rat is now on the top of power lines running from one block to another.

The player’s aim is to take the vociferous rat from one end of the city to another. While playing, ‘Razzle-rescuers’ direct Razzle to jump left, right, and up with an endless blend of moves to avoid the harassing black crows.

The game becomes more challenging as the player progresses. The tantalizing hawk emerges out and slides down for its prey. Players have to save the little rat from the ferocious predator. One incorrect move and the rat will serve as a meal for the killer hawk. The gameplay comes with 4 different city blocks each packed with starving birds.

The game becomes more intensifying as the game progresses with each city block. Razzle has to run faster as starving birds gather around the tiny little rat. The game is also packed with realistic sounds like menacing cawing, screeching of hawk and Razzle’s pitiful sounds. The game features unique character designing with hand-drawn cartoon backdrops and the animated Rat.

With rapid reflexes, players need to save the rat from a wire packed with predators. Players need to protect the rodent from hungry crows and the unkind hawk until the little rat reaches the end of the wire. The game is supported by the iPhone with version 3.0 or later.